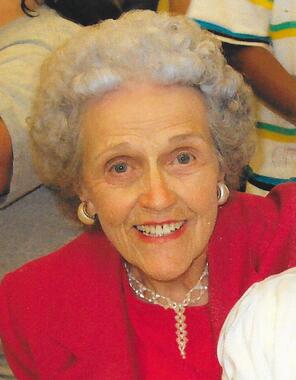 Back to Virginia's story

Virginia Larie Hudson VanGilder, 98, of Fairmont, West Virginia died Monday, December 9, 2019 in the Fazio's Elder Care. She was born October 19, 1921 in Grafton, WV the daughter of Lloyd Hudson & Virgie Alice Reese Hudson Leech. She was preceded in death by her husband Lewis Francis VanGilder in 1983.
She is survived by two sons Ronnie VanGilder & his girlfriend Janet Vigna Dudash both of Fairmont, WV and Stephen VanGilder & his wife Patricia VanGilder of Pleasant Valley, WV, a brother and sister in law Bruce Edward & Geneva Hudson of Gettysburg, PA, three grandchildren Dr. Reyna VanGilder, Jacob VanGilder & Stephanie VanGilder, three step grandchildren Gayle Gonzales, Mark Grandstaff & Casey Grandstaff and several nieces & nephews. She was preceded in death by a daughter in law Renee VanGilder.
Mrs. VanGilder was a retired registered nurse with 26 years of service from the Marion County Health Department and had been previously employed as a R.N. at the Fairmont Emergency Hospital, Fairmont General Hospital and for Dr. Jack Morgan. She was a member of Gateway United Methodist Church where she served as a communion steward, volunteer in Sunday school and member of the Ladies Circle. She was a graduate from Grafton High School and from the Fairmont General Hospital School of Nursing. Mrs. VanGilder was a member of the Women's Club of Fairmont and the American Nurses Association. She loved playing bridge and square dancing.
Memorial contributions may be made to Gateway United Methodist Church, 301 Diamond Street, Fairmont, WV 26554. 1-304-363-7847.
The family will receive friends at the Ford Funeral Home, 201 Columbia Street, Fairmont, WV 26554 on Wednesday, December 11, 2019 from 4-8 p.m. The casket will lie in state in the Gateway United Methodist Church, 301 Diamond Street, Fairmont, WV 26554 on Thursday, December 12, 2019 from 10-11:00 a.m. The funeral service will be held in the church Thursday at 11:00 a.m. with Pastor Tim Edin officiating. The committal will follow in the Beverly Memorial Gardens in Westover, WV. Online condolences may be made to the family at www.FORDFUNERALHOMES.com.
Published on December 9, 2019
To plant a tree in memory of Virginia Larie Hudson VanGilder, please visit Tribute Store.

Plant a tree in memory
of Virginia

A place to share condolences and memories.
The guestbook expires on March 08, 2020.

Deanna Alkire
I’m so sorry for your loss
Latisha mitchell
First I wanted to say I’m so sorry for your all loss of larie. She was a wonderful woman and I’m so glad I got the pleasure to take care of her at Fazio’s elder care. My staff would like to send our condolences to your family from the fazio elder care staff. You are going to dearly be missed larie ❤️🙏💔
Angie Frymyer
Larie was a truly special soul. She touched the hearts of myself and everyone employed on the ALF. She could always put a smile on your face, no matter how bad of a day you might be having. My condolences to Ronnie, Stephen and the rest of the family. This world won’t be the same without her❤️
Alice Bissett
Love and prayers to her family. She was an amazing woman. She was a true blessing to me and my staff. Rest In Peace sweet Larie.
View all