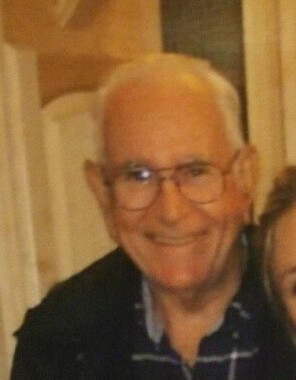 Back to Jackie's story

Jackie Tichnell Holcomb, 84, of Fairmont, passed away on Saturday, December 7, 2019, at his daughter's residence in Mannington. He was born in Fairmont on November 25, 1935, a son of the late Henderson Holcomb and Marguerite Tichnell Holcomb.
Jackie was a Christian by faith. He was a veteran with the U.S. Navy having served during the Korean War on the U.S.S. Bennington. Jackie retired in 1982 from Owens Illinois with over 26 years of service as a machine repairer and shift mechanic. Upon retirement he then worked for the Marion County Board of Education in the maintenance department until 1997.
Jackie enjoyed fishing at his camp at Tygart Lake in Grafton. He was a hard worker long into his retirement years. Jackie loved all animals, but especially his dog "Pebbles". He loved play Canasta with his step-daughters and telling jokes with anyone he could. He loved most spending time with this grandchildren and great-grandchildren who fondly referred to him as "Pap Jack".
Jackie is survived by his step-children, Walter Holbert and his wife Carol of Florida, Karon Corbin and her husband Randall of Fairmont, James Daniel Holbert and his wife Althea of Fairmont, and Brenda Fluharty of Mannington; 12 grandchildren; 30 great-grandchildren; 11 great-great-grandchildren; and a sister, Jeanie Urso of Florida.
In addition to his parents, Jackie was preceded in death by his loving wife, Dantia Stout Holcomb, whom he married on June 19, 1973; two step-daughters, Linda Starr Brewer and Ann Marie Goss; step-father, Alfred Bartholow; three brothers, James Holcomb, David Holcomb, and Donnie Holcomb; a sister, JoAnn Bolinger; and a son-in-law, Gary Fluharty.
Memorial donations may be made to the Marion County Humane Society, P.O. Box 905, Fairmont, WV 26555.
The family will receive friends at Ford Funeral Home, 201 Columbia St., Fairmont, WV 26554, on Wednesday, December 11, 2019, from 2 p.m. until 4 p.m. and 6 p.m. unit 8 p.m. and on Thursday, December 12, 2019, from 10 a.m. until 11 a.m. The funeral service will be held in the funeral home on Thursday, December 12, 2019, at 11 a.m with Reverend Bill Toothman officiating. A committal service will follow at Pisgah Cemetery where full military rites will be conducted by the Marion County Veteran's Council. Online condolences may be made to the family at www.fordfuneralhomes.com.
Published on December 9, 2019
To plant a tree in memory of Jackie T. Holcomb, please visit Tribute Store.

Plant a tree in memory
of Jackie

A place to share condolences and memories.
The guestbook expires on March 08, 2020.

John urso
I loved my uncle Jackie. I truly did. I wish our lives had been closer. Good bye friend
View all