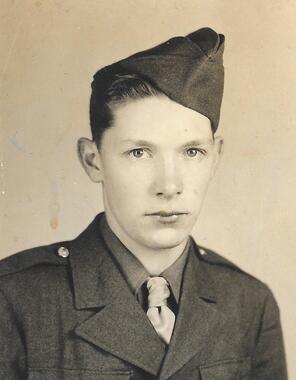 Back to Howard's story

Howard H. Glaspell, 93, of White Hall, West Virginia died Sunday, December 8, 2019 in the Genesis Healthcare Pierpont Center. He was born September 14, 1926 in Boothsville, WV a son of the late Harvey Amos Glaspell and Della Mae Tucker Glaspell. He is survived by his wife Willa June Nuzum Glaspell of White Hall, WV.
He is survived by a son and daughter in law Richard W. & Lou Ann Glaspell of Grafton, WV, a brother and sister in law Earl & Donna Glaspell of Corbin Branch Road Community, 2 grandchildren and their spouses Richard "Rick" Glaspell and his wife Jenny Glaspell and Shannon Adams and her husband Ted Adams, 4 great grandchildren Ian Glaspell, Isaiah Glaspell, Haley Adams and Cole Adams, and many nieces and nephews. He was preceded in death by 5 brothers James "Jim" Glaspell, Charles "Bud" Glaspell, Harvey "June" Glaspell, Clarence "Gene" Glaspell and Silas "Si" Glaspell and 4 sisters Ruby Furbee, Betty Saunders, Annie Hayhurst and an infant sister Mary Ruth Glaspell.
Mr. Glaspell was a retired crane and truck driver for Industrial Contractors in Fairmont, WV with 26 years of service. He was Protestant by faith and served in the United States Army during World War II. He enjoyed the outdoors and liked farming, hunting and working with his equipment.
The family would like to thank the doctors, nurses and staff of the Genesis Healthcare Pierpont Center B-Wing and of the Amedysis Hospice for their compassion and support.
The family will receive friends at the Ford Funeral Home, Ford Chapel, 201 Columbia Street, Fairmont, WV 26554 on Thursday, December 12, 2019 from 4-8 p.m. and Friday, December 13, 2019 from 10 - 11 a.m. The funeral service will be held in the funeral home Friday at 11:00 a.m. with Pastor Jerry Nuzum officiating. The committal service will follow in the Clermont Cemetery in White Hall, WV. Online condolences may be made to the family at www.FORDFUNERALHOMES.com.
Published on December 10, 2019
To plant a tree in memory of Howard H. Glaspell, please visit Tribute Store.

Plant a tree in memory
of Howard

A place to share condolences and memories.
The guestbook expires on March 09, 2020.

Kim, Larry and Abigail Thompson
Since we cant be with you in this time of sorrow. We wanted you to know that you are in our thoughts and prayers.
Love the Thompsons.
Carolyn Gray
Dearest Willa
My sincere sympathy to you and your family. You are in my prayers. I think of you often. Let me know if I can be of any help to you.
View all