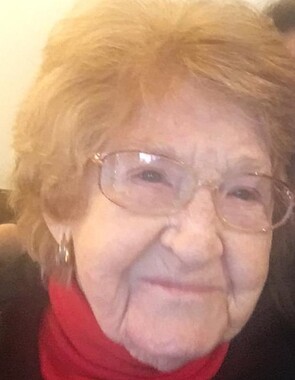 Back to Betty's story

Betty Louise Sloan, 93, went home to be with the Lord Wednesday, February 12, 2020. She was born in Fairmont on January 16, 1927, a daughter of the late James Henry Jones and Mabel Ruth Decker Jones.
Betty graduated from Fairmont General Hospital Nursing School and worked as a registered nurse. She was a member of the Norway Church of Christ. She was a dedicated wife, mother, and grandmother. She enjoyed sewing, baking, embroidering, traveling, her flower garden, and reading her Bible.
Betty is survived by her children, Henry "Butch" Sloan, Jr. and his wife Dianna of Fairmont, Daniel Sloan and his wife Florence of Fairmont, Douglas Sloan of Fairmont, and Debra Nestor and her husband Harry of Farmington; grandchildren, Jonathan "Jon" Sloan, Dawn "Sissy" Sloan, Jason Sloan, Jack Sloan, Jessica Sloan, Daniel "Danny Boy" Sloan, Stacy Sloan Newton, Trisha Sloan Ramsey, Michael Sloan, Mandy Louise Nestor Miller, and Melissa "Missy" Nestor McKee; 24 great grandchildren, 2 great great grandchildren; and several nieces and nephews.
In addition to her parents, Betty was preceded in death by her husband, Henry "Pappy" Sloan, Sr., and brothers, Kenneth "Kenny" Jones, Sr., James "Jim" Jones, and William "Bill" Jones, Sr.
The family would like to give special thanks to the staff at St. Barbara's Memorial Nursing Home and Amedisys Hospice, along with everyone who contributed their time, love, and care.
The family will receive family and friends at Domico Funeral Home, 414 Gaston Avenue in Fairmont, on Friday, February 14, 2020 from 2:00 p.m. until 8:00 p.m. and on Saturday, February 15, 2020 from 10:00 a.m. until 12:00 p.m. The funeral will be in the funeral home on Saturday, February 15, 2020 at 12:00 p.m. with Preacher Andy Miller and Pastor William Stutler officiating. Interment will follow at Grandview Memorial Gardens in Fairmont. Online condolences may be sent to the family at www.domicofh.com.
Published on February 12, 2020
To send flowers to the family of Betty Louise Sloan, please visit Tribute Store.

Send flowers
in memory of Betty

A place to share condolences and memories.
The guestbook expires on May 12, 2020.

Eva jones (Hayes)
I was deeply saddend to hear of aunt betty passing. I always thought a lot of her.I remember going to her house when I was little. Mostly to play with cuz Debby.she was always so nice.My heart goes out to the family
Rachel Weaver
Betty was an amazing lady. I always lived seeing her beautiful smile at church. May you be wrapped in God's love during this difficult time. Prayers and hugs.
Marlene

Betty us now resting in the arms of God. He said to her "welcome home my good and faithful servant"
RIP Betty

Brenda Burgreen
My deepest sympathy to all the family...Prayers to all.
Ruth lauderback